At the Rosslyn stop for last Friday's Bike to Work Day, a guy dressed in a batman costume was riding a small unicycle.  Another guy dressed as superman was riding a miniature bicycle.  They were entertaining.  But there was a real superhero at the Rosslyn stop.  With a heavy pack on his back, Tom S. rides a vintage-1885 bicycle to work in Rosslyn.  He's sixty-one-years old, has served in the Army for more than three decades, and recently returned from Afghanistan.  His Airborne jersey accurate indicates the toughness necessary to ride his bike.  He's ridden this bike on a hundred-mile ride. 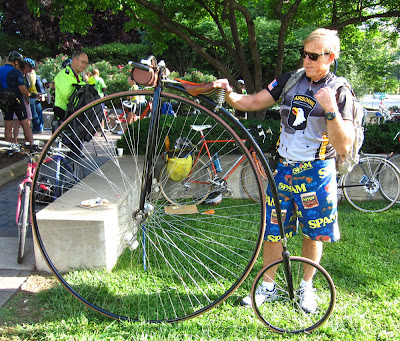 Tom's bike puts the rider atop a wheel that has roughly a five-foot diameter.  The rider's legs on the pedals directly crank the wheel.  So, going downhill, the wheel directly cranks the rider's legs.  The bike has a brake that pushes against the solid-rubber tire.  The brake is essentially non-functional.  The bike's balance is delicate and close to that of a unicycle.  Hitting a bump, flying forward off the bike, and dying historically has been a significant risk for riders of this type of bicycle.

Tom offered the Ode Street Tribune's intrepid reporter a chance to take a seat on his bike. With a helpful boost from Tom, the Tribune's reporter rose above the crowd and sat atop the huge wheel.  Wow!  Great view.  Also nice position for a front dive.  How am I gonna get off this bike?  All you have to do is blindly reach a leg backwards to step on a small frame peg just above the tiny rear wheel.  With someone holding the bike steady and with a hand supporting your back, dismounting safely isn't too difficult.

Bicycling is for everyone.  Riding a vintage-1885 Victory Bicycle to work is only for a superhero.
Posted by Douglas Galbi at 8:44 PM

My favorite superhero of them all!

I do not know what that bicycle is called but it is not a uni-cycle. A uni-cycle has only one wheel.

The bike is called an ordinary. They are also called hi-bikes, tall bikes, highwheelers, and in England, pennyfarthings or pennys. Great to see Sandy on his bike. If you want more info on old bikes try www.thewheelmen.org or go to www.victorybicycles.com
Al

Way to introduce the world to your classy sense of fashion with those awesome Spam shorts Dad!