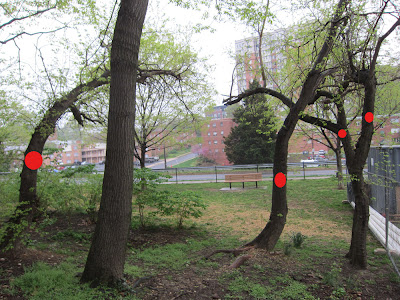 Four trees living in Rosslyn's Ft. Myer Heights Park are not straight.  Arlington County plans to hack them down.

Queer-presenting trees are a natural and valuable part Rosslyn's diverse landscape.  In Asian art, unusually shaped trees are considered the most beautiful.  Think of bonsai and landscapes painted on silk wall hangings. Straight trees are normal and boring.  While straight trees are also a welcomed part of Rosslyn forestry, Rosslyn needs some queer trees.

The motive for cutting down the queer trees is suspicious.  According to a well-informed source, the trees are likely to fall over or be a safety risk in the near future.  Cutting the trees down now, in conjunction with the construction of the children's playground, is cheaper than bringing equipment in and working around the playground after it's been constructed.  That's a suspiciously reasonable strategy for saving tax dollars.

The Tribune believes that no action should be taken until there's an evaluation of whether inappropriate bias has motivated plans to cut down the queer trees.
Posted by Douglas Galbi at 10:38 PM