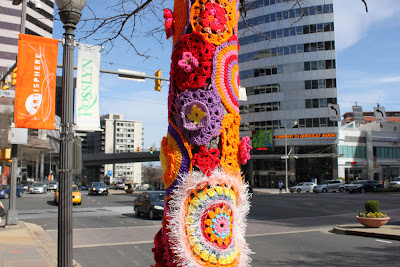 The yarn bombs are the work a guerrilla stitch brigade that has been meeting in Artisphere weekly since October.  The brigade has brought together 130 volunteers who have contributed hundreds of hours of work to make the yarn bombs.

According to a covert operator placed close to the guerrilla leaders, the guerrilla stitch brigade will strike Rosslyn again next Saturday.  The planned target is Cupid's Garden at the intersection of Wilson Blvd. and N. Oak St.  Be watchful in this area Saturday afternoon, or you might get wrapped up in an explosion of yarn.
Posted by Douglas Galbi at 11:13 PM