With years of hard work, a homeless man built an incredible rural craft mansion in Rosslyn.  This custom-designed home was located near Key Bridge, in the wild lands just north of the multi-user path near where it crosses over Rt. 66.  It measured about 150 ft by 150ft.  A large number of dead branches were lashed together to form walls and rooms.  Each branch was unique in its natural form and gleamed with the shine of naturally aged wood.  Those walls were further decorated with bits of colored twine and colored paper.   Todd Martin, a resident of Rosslyn's historically important Westmoreland Terrace Condominiums, stated: “Every day there would be something new, garbage or branches, wood vines. It was pretty remarkable.” This rural craft mansion was a tribute to Rosslyn's emerging leadership in technology and design.  It was also a homeless shelter for the one homeless man who built it. 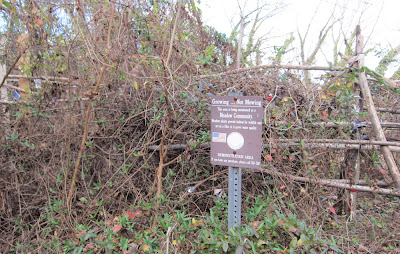 Rosslyn-based WJLA reports that this homeless shelter has been demolished.  Apparently the Virginia Department of Transportation (VDOT) received some complaints from passers-by who feared that it might be a haven for crime.  We have nothing to fear but fear itself.  Nonetheless, VDOT responded by bulldozing the mansion and hauling away the resulting wreckage with dump trucks.  This is a sad day for Rosslyn.

The Ode Street Tribune was aware of this neighborhood marvel.  The Tribune decided not to report on it.  The Tribune feared that a story would attract even more tour buses to Rosslyn.  Noise from tour buses has been a concern for Rosslyn residents. The Tribune was also concerned that gawking tourists would infringe on the homeless man's privacy and distract him from building an even greater home.  In retrospect, the Tribune's editorial judgment may have been wrong.  If more persons had seen that incredible home, VDOT might not have been able to get away with destroying it.
Posted by Douglas Galbi at 11:20 PM

Good reporting - but what happened to the homeless man. I suggest you use the vast resources of the OST to find out. Shame on the to people who destroyed this man's hone