James Brown in Rosslyn: "This is my home town"

At the majestic Rosslyn Vista Park this morning, a CBS news crew videoed CBS This Morning anchor James Brown live-to-air discussing tomorrow's 50th Anniversary March on Washington.  Brown was born in the greater Rosslyn metropolitan area and resides here today.  Standing in Rosslyn, he declared on CBS nationwide, "This is my home town." 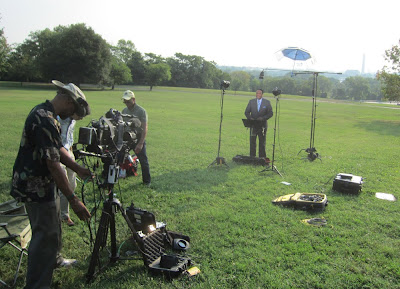 The news shoot showed the excitement and effort that goes into making the news.  Shooting news segments live demands the ultimate in professionalism.  If you screw up, everyone sees it. Moreover, most viewers don't appreciate the difficulty of lighting outdoors on a sunny day. Especially when shooting high-definition video, the difference between good lighting and bad lighting is like the difference between a young student eager to go to college and a guy who just woke up from a bad hangover. The news crew set up three lights and a reflector.  With two minutes to action, the cameraman asked for another light.  The crew hustled to get the additional light into position, but then they had to power it.  One guy sprinted to the truck, turned on the engine to power the generator, and rolled a cord from the truck to the light.  But time was gone.  The cameraman had to role with what he had.

James Brown and the CBS news crew were back in Rosslyn for the CBS Evening News.  On this segment of CBS from Rosslyn, Brown told the story of a young guy to whom Martin Luther King gave the actual written text of the speech that he read on that historic day.  Despite this long day of news work, Brown stayed on the scene for a few minutes to greet and chat with local news fans.

Rosslyn is a poignant emblem of the ideals of Martin Luther King's "I Have a Dream" speech.  While many prefer to remain silent about this sad history, there was a time when many looked down on Rosslyn as a third-class place.  The right sort of people wouldn't want to be seen in Rosslyn or with Rosslyn residents.  Now Rosslyn is moving forward to a much brighter future.  Help to realize this dream by attending the Realize Rosslyn Process Panel Meeting on Sept. 10, at 7pm in the County Board Room at 2100 Clarendon Blvd.  According to the official announcement:


The tentative agenda primarily includes follow up presentation and discussion on building height and form and urban design strategies introduced at the July 24 panel meeting. All are welcome to attend and observe. 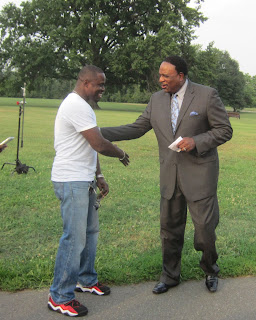 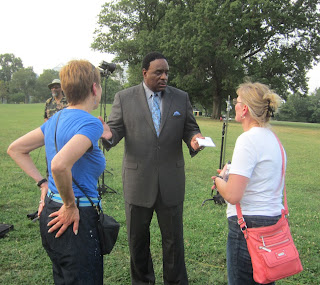 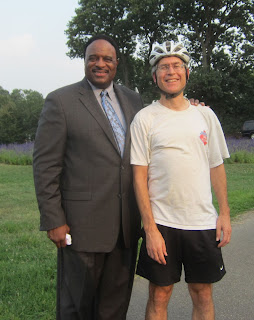