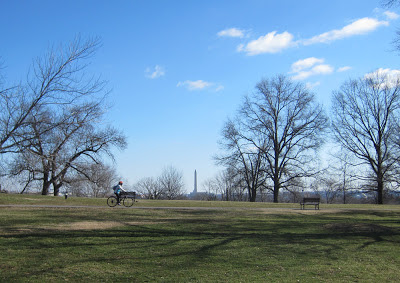 
The park is one of the most heavily visited park sites in the national capital region, with thousands traveling there yearly. It also functions as a neighborhood park for nearby residents. However, highway construction and cemetery expansion have isolated the parcel and diminished its public accessibility to the point that it has adopted more of the characteristics of community use rather than national interest. {emphasis added}

The most relevant neighborhood and community for the park is Rosslyn.  Moreover, the park is much more magnificent than the term "ridge" indicates.  The name "Arlington Ridge Park" is thus completely inappropriate. That name is also virtually unknown even among long-time Rosslyn residents.

The park should be renamed through an open, participatory democratic process.  But the Ode Street Tribune is not afraid to take dramatic action to confront a neighborhood crisis.  The Tribune will operate under a continuing resolution to call the park "Rosslyn Vista Park" until a new park name is formally adopted.

Posted by Douglas Galbi at 6:00 PM

Excellent, "power to the public" when it comes to naming public places. For example, it was a travesty when they tried to rename "National Airport'. I suggest that the Ode Street Tribune should have a policy of only using the airport's proper name, that is, "NATIONAL AIRPORT".