On January 21, the Arlington County Historical Affairs and Landmark Review Board (HALRB) unanimously voted to declare Rosslyn's Wilson School a historical district. Wilson School thus joins the historically important Westmoreland Terrance Condominiums and other Rosslyn sites as being officially recognized as historic. This historic designation will now go to the School Board for consideration in the context of planned redevelopment of the Wilson School site. If the School Board doesn't at least vote to erect a historic marker, Rosslyn is likely to rise in revolt. 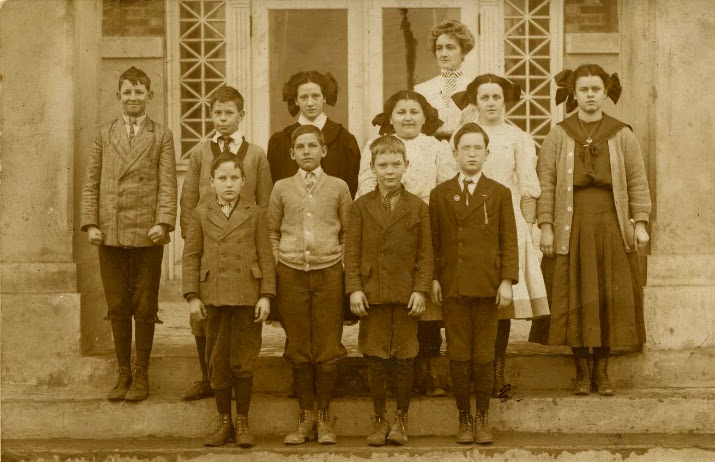 The application for designating Wilson School as a historic district offers much interesting information about the history of Wilson School.  Built in 1910, it was originally called the Fort Myer Heights School. It was renamed as Wilson School in 1925. It's the second oldest extant school building in Arlington. The school was designed by the renowned Richmond-based architect Charles Morrison Robinson.

The photo above shows seventh and eighth grades at Fort Myer Heights School, probably in 1910-11. These students look as happy to be in Rosslyn as residents are today.
Posted by Douglas Galbi at 12:04 AM

Has Wilson School been tested for lead paint and asbestos?