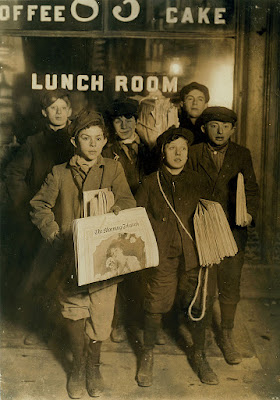 Publication of the Ode Street Tribune will cease as of today on account of its newsboys strike. Publication will resume as soon as a plot for a musical has been established or the strike is otherwise resolved. Local residents are urged to petition local opera company UrbanArias to try to arrange for an intervention. We hope that the matter will be settled by early July.
Posted by Douglas Galbi at 12:09 AM

Newsboys, read the overwhelming public outcry on this site pleading for a return of their local news - now - and go back to work, for the good of Rosslyn

Thanks for your support. The publisher is standing firm in his demands. The strike will continue until he gets in a musical.

But what about the overall welfare of America? Can't you see how far this country has fallen since this strike began? Do you really want to be known as the publisher responsible for the downfall of this country? God have mercy on us common folks!!!

Hi, Neat post. There's an issue together with
your website in web explorer, might test this? IE still is the market chief and a good element of people will leave out your
magnificent writing due to this problem.