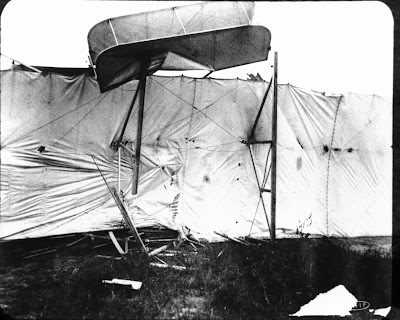 Fort Myer in Rosslyn is the site of the first passenger death in the flight of a heavier-than-air aircraft.   Orville Wright performed many flights of his pioneering airplane at Fort Myer beginning on September 3, 1908.   On Sept. 17, 1908 at Fort Myer in Rosslyn, Wright's airplane crashed.  It was carrying Wright and passenger Lt. Thomas Selfridge.  The crash killed Lt. Selfridge.  Selfridge, like Rosslyn itself, is under-appreciated in aviation history. 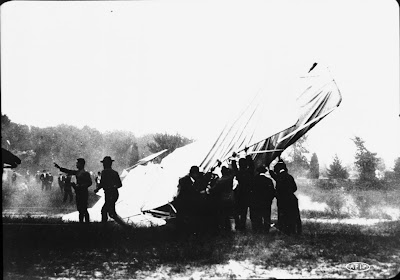 Note: Those photographs, which are stamped AFIP (Armed Forces Institute of Pathology) were probably made by U.S. Army personnel as work for the U.S. government.  The originals are available at the National Museum of Health and Medicine in Washington, DC.  Flickr user otisarchives1 has admirably served the public by making these photographs and others freely available worldwide.
Posted by Douglas Galbi at 5:26 PM