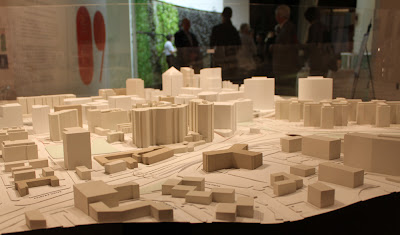 A new exhibit celebrating Rosslyn's past and future opened this week at Artisphere.  Rosslyn has a distinguished past: Orville Wright's pioneering flight, Buffalo soldiers at Fort Myer, and the roots of Arlington's black history, to mention just some of it.  But well-balanced reporting should also mention Rosslyn's historical difficulties.  As this exhibit forthrightly notes:


In years past, Rosslyn has been the place people love to hate.  In the late 1800's, farmers crossing Aqueduct Bridge from Georgetown into Virginia had to hire armed guards to protect them against marauders and thieves lurking in the Rosslyn darkness below.  Early in the 20'th century, an Arlington County supervisor, Crandall Mackey, led a righteous band of Rosslyn-haters to burn down the saloons and bawdy-houses besmirching our fair county's reputation.  In the 1940's and '50's, it was an industrial site, replete with unsightly pawnshops, oil tanks and lumber yards.

With the help of Rosslyn Renaissance and other local civic organizations, Rosslyn has become a center of office work, art, fashion, and clean living.  Rosslyn residents have deep appreciation for their location.  Among those surveyed, 100% believe that Rosslyn's best days are still yet to come.

Artiphere's exhibit, Rosslyn: A Work in Progess, will be on display in the WIP Gallery through March 13.
Posted by Douglas Galbi at 9:48 PM