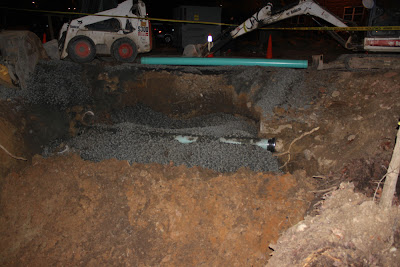 With bigger equipment and a determined effort, a repair crew has plugged the Deep-Soil Rosslyn Water Blowout and restored normal water service to the neighborhood.   Temperature changes driving the expansion and contraction of a sixty-year-old water main apparently caused the blowout.  The repair crew was onsite by 8:30 this morning.  The condition of the site suggests a tough day's work.

Some controversy has developed regarding the size of the spill.  An Ode Street Tribune report stated that the blowout spilled "tens of thousands of gallons of clean water."  That estimate is based on an estimated water flow of three gallons per minute, for (60 minutes per hour)x(24 hours per day)x(10 days flowing) = approx 43,000 gallons of water.  It's unlikely that the size of the spill was less than this estimate, but the total outflow may have been several times larger than the Tribune estimate.

Damage from the blowout appears to be minimal.  Much of the ground in Ft. Myer Heights Park has been thoroughly watered.  That would have been helpful this past summer.  In addition to getting a new section of water main, the neighborhood is also getting new sections of sewer piping.  Now you can flush your toilet with additional confidence!
Posted by Douglas Galbi at 7:54 PM