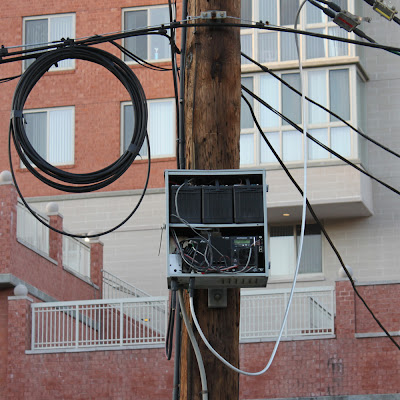 A Comcast power box on the street pole near 1523 Fairfax Dr. has been open for weeks.  The open box exposes wires and connections to the elements.  That's likely to make service less reliable.

Despite having to endure a burdensome response form that required considerable personal information, the Ode Street Tribune has reported the open power box to Comcast.   In a recent Arlnow poll, 73% of respondents rated their experience with Comcast as "poor" or "very, very bad."  That poll is not based on a representative sample of Comcast customers.  But it does at least indicate some frustration with Comcast service.  The Ode Street Tribune hopes that its reporting can help Comcast do better.

Some business competition for Comcast would also help.  Unfortunately, Westmoreland Terrace and other neighborhood buildings are still waiting for the opportunity to choose Fios service.
Posted by Douglas Galbi at 8:27 PM

Hi Douglas - I work for Comcast. I came across your blog and I have notified my contacts to get this corrected ASAP.

Thanks for providing the opportunity to assist.