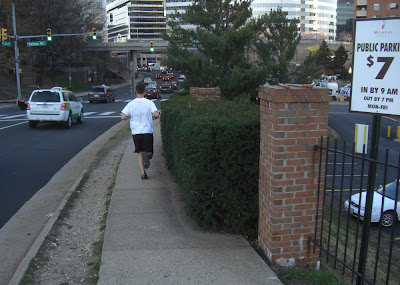 An important issue in the Meade St. Bridge Alternatives Study is widening sidewalks.  The second public meeting on Meade St. Bridge alternatives presented alternatives to widen sidewalks to at least 8 feet.  That would be done by removing one traffic lane.  In addition, the meeting included some discussion of possibly setting back the River Place retaining wall to enlarge the sidewalk in front of River Place.

A simple, cheap way to make the sidewalk in front of River Place larger by about two feet is to trim the bushes.
-  -  -  -  -
A reader who has had painful experiences with encroaching hedges emails:


I've often found this problem of hedges which, if left untrimmed, gradually grow out further and further thus taking over more and more of the public sidewalk. However, just trimming back the hedge is not as simple as one might at first suppose.  It usually requires cutting back the branches so far that bare, ugly branches are exposed to view making it quite unsightly for one or more growing seasons until the new leaves can fill in (assuming it has not already killed the bush).  It's a rather time consuming and risky procedure that horticulturalist often refuse to undertake. I have usually ended up recommending that the bushes be  cut down and started  again "from scratch".