Bike to Work Day drew heavy traffic through the Rosslyn pit stop yesterday.  Despite the heavy cycle traffic, no delays were reported on major bike routes, and bike drivers seemed to be enjoying being outside on the roads and trails. 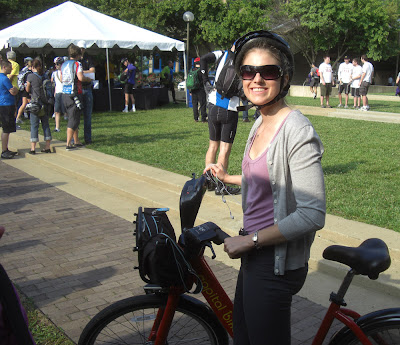 The Ode Street Tribune spoke with bike commuter Sarah at the Rosslyn pit stop.  She commutes from Courthouse to Foggy Bottom using Capital Bikeshare (CaBi).  Sarah said sometimes she and her friends take CaBi bikes from Foggy Bottom to Farragut West to take advantage of better lunch choices there.  Taking the CaBi bike saves them valuable lunch break time, plus the ride doesn't cost them anything because they drop off the bike before lunch and pick up a new one after lunch.  Sarah is taking good advantage of CaBi.  You should, too!

Mike Steidley put on an amazing mountain bike stunt show at the Rosslyn pit stop.  Video highlights included below.  Bike nerds were thrilled when Mike said that a lot of people ask him what tire pressure he runs.  He said he's got 27 psi in the front and 22 psi in the back.   In case you don't know, that's way too low tire pressure for bicycle commuting.  But go with that pressure in your dreams, when you're stunt riding.

Posted by Douglas Galbi at 6:15 PM