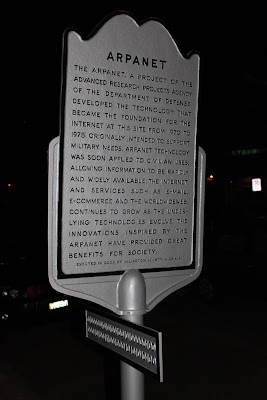 Another story in Rosslyn's illustrious history of technological leadership is the invention of the Internet in Rosslyn.   A plaque in front of 1400 Wilson Blvd in Rosslyn notes:


The ARPANET, a project of the Advanced Research Projects Agency of the Department of Defense, developed the technology that became the foundation for the Internet at this site from 1970 to 1975.

Leading local news sources ARLnow and bArlington have reported that the Internet was invented in Arlington.  Yes, and more precisely, in Rosslyn.  You can count on the Ode Street Tribune to headline the crucial facts.

It is a long and glorious story filled with dragons and fairies... well actually geeks and diet coke.

The Internet (ARPANET) was conceived of in DOD by Larry Roberts.

The hardware was invested and built by BBN in Boston.

Then in 1972 working for DOD Vint Cerf and Bob Kahn invented the Internet Protocol. Not sure where they were.

One thing is fur sure. The man with the vision... and the checkbook... Larry Roberts, was in Arlington.

But when it became DARPA it stopped slumming in Rosslyn and moved to Virginia Square?