light up Artisphere every night 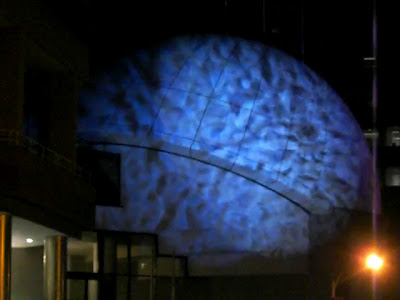 In a brief interview with the Ode Street Tribune last week, Peter Fallon, who is very knowledgeable and active in community development, suggested that Artisphere be lit up every night. The Tribune heartily endorses getting lit.  Artisphere needs to raise its profile.  Having its sphere glowing every night would make Artisphere into an unmissable Rosslyn landmark.

Lighting up Artisphere would also highlight Rosslyn's artistic leadership in the greater Washington area.  The Hirshhorn Museum plans to light up its building with a specially commissioned work every evening for two months starting March 22, 2012.  Per square foot and per dollar spent, Artisphere is far more artistically interesting than the Hirshhorn.  Let Artisphere's light shine!
Posted by Douglas Galbi at 9:09 PM