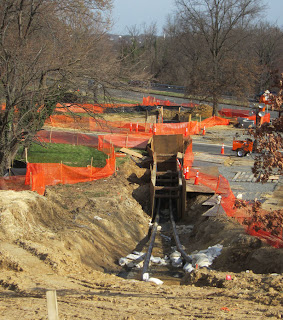 Construction of the power line along Rt. 110 is progressing rapidly.  So far there's been little impact on large number of walkers, runners, and cyclists on the scenic Arlington-Rosslyn-Washington expressway.  But the next section of the power line will be installed along Rosslyn's Arlington National Cemetery, between the expressway and the road.  If the power line is installed through a trench, major traffic disruption could occur.  Boring, such as occurred under the access road, is also possible.  The Ode Street Tribune favors boring for power line installations, but not for news.
Posted by Douglas Galbi at 9:38 PM