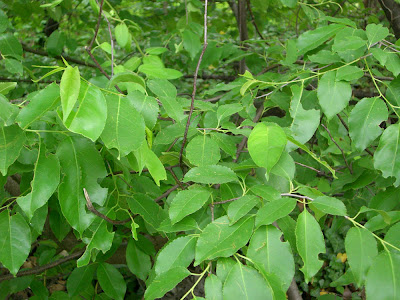 Controversy has erupted over the Ode Street Tribune's report that tent caterpillars are camping in a tree near the park.  Some readers believe that, contrary to the Ode Street Tribune's report, these caterpillars represent a serious risk to the tree.  The Tribune values highly its unimpeachable reputation for journalistic correctness.  We will not let criticism of our reporting go unanswered.

Tribune reporters are trained not to be satisfied with what they see merely with their own eyes. They also interview experts to provide authoritative quotes that give gravitas to news stories.  In the course of investigating this story, the Tribune's reporter contacted an Arlington Regional Master Naturalists.  The Master Naturalist wrote:


They don't do too much damage, because by the time they are done and gone, the tree has a chance to produce new leaves to replace any that they ate.  Rarely, if a tree has tremendous infestations (many nests) year after year it will be weakened and succumb.

To leave no leaf unturned on this story, the Tribune's reporter also contacted a member of the Arlington County Urban Forestry Committee.  This tree expert wrote:


Even if they eat a lot of a tree's leaves a healthy tree will flush out a second time.  Less healthy trees would be stressed considerably by losing their foliage and subsequently more vulnerable to drought, other insects, and diseases.  A tree in a very weakened state could die from such a loss of foliage.

This tree clearly is healthy.  While the tent caterpillars have eaten leaves on the branch where their tent is located, many, many more leaves remain.  The tree is unlikely to have to flush out leaves a second time.

The Tribune stands by its story.
Posted by Douglas Galbi at 10:25 PM

Clearly, more research is urgently required. First, we need to know exactly what type of insects we are dealing with. Are these insects "Malacosoma Americanum","Lymantria dispar Linnaeus" or are they "Hyphantria cunea". All entomologists know that these three well-known caterpillars are often misidentified. As a first step, the Ode Street Tribune needs to positively identify these insects. Before anyone can decide what needs to be done, they need be positively identified.
Second, even from the sketchy information provided by the Ode Street Tribune, I understand that caterpillars can weaken a health tree. Furthermore, caterpillars can kill a weakened tree. The Ode Street Tribune's sketchy report also indicated that the tree in question appears to be healthy. Apparently the position of the Ode Street Tribune is that we should wait until these insects weaken this tree before we take action. This appears to be short signed. I strongly urge the Ode Street Tribune to determine if these insects are "Malacosoma Americanum","Lymantria dispar Linnaeus" or are they "Hyphantria cunea". After this is done further research can determine what need be done to balance the needs of tree life with the needs of insect life.

Since the life of these insects is at stake, we need an appeal process