cultivated and wild flowers in Rosslyn

The flower beds near Rosslyn's Netherlands Carillon are famous for magnificent tulip displays.  But flowers aren't just confined to those beds.  Flowers are blooming everywhere in Rosslyn.


A gorgeous mix of blossoms -- primary reds in the median beds with tropicals and grasses throughout -- are on their way.  Terra cotta planters will pop with Pennisetum Fireworks and 'Wildfire' verbena and 'White Queen' caladiums will provide contrast and texture.

Wilson Boulevard will be lined with tree pits dressed in blazing Red Begonias, and Metro Park will shine with Variegated Ginger and 'Dragon Wing' begonias.

Get the full story in the new issue of Rosslyn Magazine.  This new issue was available at yesterday's Rosslyn Renaissance meeting.  Rosslyn-area residents should look for it coming in the mail soon.  Everyone else across the world will be able to read it on the web.

In addition to cultivated beauty, Rosslyn also has a wild side.  A freelance reporter recently forwarded to the Ode Street Tribune a photo of wild flowers growing in Rosslyn along the Virginia-Rosslyn-Washington pedestrian-bike superhighway.  In upstate New York more than three decades ago, kids liked such flowers and called them 'buttercups.'   Today in the Rosslyn metropolitan area, commuters are so busy rushing to work that they bike right by these flowers and don't even notice them.  That's sad.  Take time to notice Rosslyn's flowers! 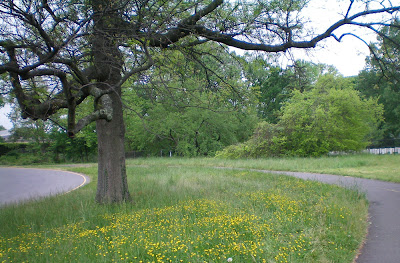