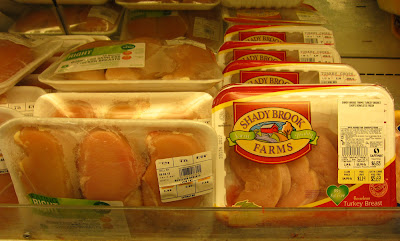 Rosslyn's Safeway is still selling Shady Brook Farms adulterated "all natural" turkey chops.  According to very fine print on the Shady package, the chops have been injected with up to 10% solution containing salt and sugar.

More than a year ago, the Ode Street Tribune got a taste of this food outrage.  The Tribune posted an exposé and called on the massive multinational corporation Cargill (which controls the Shady Brook Farms brand) to stop this shady turkey selling.  Unfortunately, the Cargill Corporation has not yet yielded to the Ode Street Tribune's righteous demand.

The Tribune believes in the power of the Fourth Estate.  As long as those turkey chops remain poorly labeled in the Rosslyn Safeway, the Ode Street Tribune will oppose their sale.  Never give up, never surrender.
Posted by Douglas Galbi at 10:50 PM