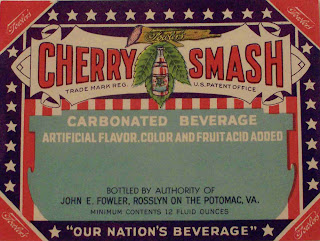 The memory of Rosslyn's Cherry Smash is cherished in lovers' hearts.  Chosi has collected Cherry Smash bottles, as well as Arlington Brewing Company bottles from Rosslyn.  Cherry Smash soda fountains are offered on eBay for $170.  But surely the best memory is the long-ago taste of Cherry Smash.  Do you remember that cherry?
Posted by Douglas Galbi at 10:19 PM