Rosslyn's winter clothes collection to help the homeless scored a record 100 bags of clothes this year.  Last year Rosslyn collected 65 bags of clothes.  According Jamal, the Rosslyn Business Improvement District's project leader, this year's total could go even higher with donations still to be received from area schools.  Twenty-three buildings in Rosslyn hosted clothes collection boxes over the past four weeks.  The collected clothes will serve the homeless through the Arlington Street People's Assistance Network (A-SPAN). 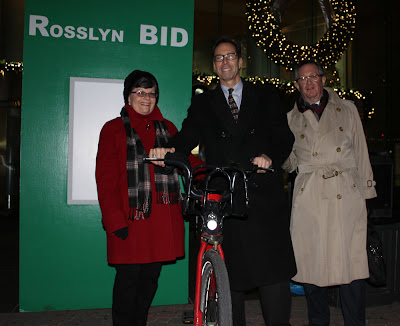 Light Up Rosslyn celebrated the successful end of the clothing collection and turned up Rosslyn's lights for the holidays.  Rosslyn's AllSpice Cafe and Catering, a small, locally owned business that could make your holiday entertaining much easier, served attendees hot chili and cider.  Arlington County Board member Jay Fisette rode a Capital Bikeshare bike from the Arlington County building down to Rosslyn to participate in the event.  Fisette noted how quick and easy getting to Rosslyn is.  At exactly 6:30pm, local leaders flipped a switch and at the same time rooftop lights across Rosslyn lit up.  This incredible technological feat more than made up for minor technical difficulties with podium speaker wiring at the event. Take time to enjoy the artistic lines of Rosslyn's skyline, now sparkling with lights. 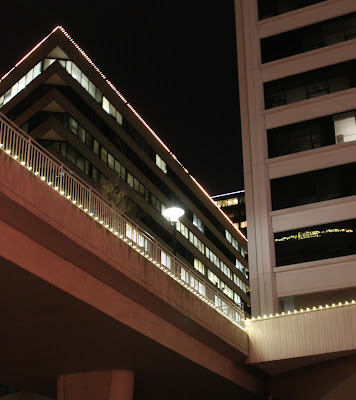 The Ode Street Tribune has learned that Monday Properties' buildings in New York City has animated holiday lights.  Why doesn't Rosslyn also have animated lights on Monday Properties' buildings?  We speculate that, given Rosslyn's dynamism, such additional animation is considered unnecessary.  Moreover, New York City lacks the W3FI animation that played on Artisphere's iconic dome in conjunction with the Light Up Rosslyn ceremony.  New York City will have to set up its game if it wants to be considered Rosslyn on the Hudson.
Posted by Douglas Galbi at 10:34 PM