Tribune journalist to work through holidays

After a difficult, three-hour meeting, the Ode Street Tribune's Managing Board voted 20 to 1 to require the Tribune's journalist to work through the holidays.  The Executive Editor pointed to the importance of cost-cutting measures and conserving resources to invest in the Tribune's new news distribution initiative.  She described the journalist's performance as satisfying, but not highly stimulating. This year the Tribune failed to win any Putzer Prizes.

The Managing Board's lone dissenting vote was Abigail Bigglesworth-Nigglesmith, Acting Deputy Assistant Manager of the Investigative Reporting Bureau.  She argued that the Tribune's journalist should be given New Year's Eve off as an unpaid holiday.  Drunkenness in the news room, she noted, does not serve the Tribune's reputation for sober reporting.  Emphasizing the importance of recognizing in some way the contribution of every Tribune employee, she urged the Board to award the journalist a fruitcake.  The Board declined, citing cost.

Many persons work through the holidays to help make ends meet, to provide necessary services, and to make the holidays especially festive and joyous for others.  The Tribune's journalist will be one such employee.  The Tribune's Lead Headline Writer, who will temporarily assume overall management responsibility during the holidays, is another. 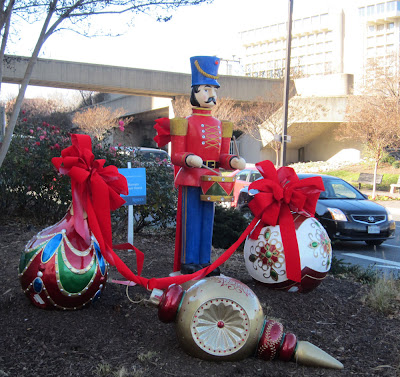 The photo above shows a holiday display in Rosslyn at the corner of N. Lynn St. and Lee Highway.  The Rosslyn Business Improvement District sponsored the display.  When you see that drummer man, think of the Tribune's journalist, and enjoy your holidays!
Posted by Douglas Galbi at 9:34 PM

Perhaps the journalist could gather some news today, put it in the freezer, and then thaw it out on the holiday. Management should think outside the box rather than being such a scrooge.