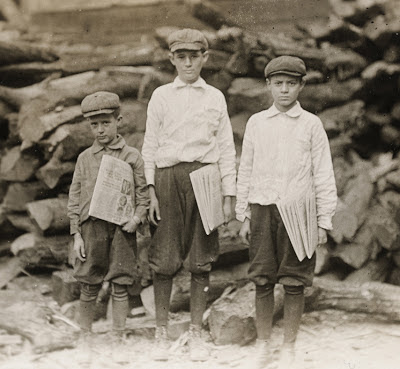 A revolting turn of events today left an ugly stain in the Ode Street Tribune's newsroom.  Early this morning, the Tribune's journalist reported to management that the Tribune lacked ink to print the news.  He stated that appropriate supplies of ink could not be obtained until Jan. 2, 2013.

Furious with this news interrupting its holiday party, management immediately contacted its outside consultant hired to produce a report on newsroom re-invention, business model innovation, and bringing the Tribune into the 20th century.  The consultant agreed to produce a briefing on ink supply-chain management for senior Tribune executives.

Just after that supplementary work contract had been signed and the management holiday party resumed, a newsroom intern serving cocktails handed the Deputy Assistant Managing Editor a Cosmopolitan and asked, "What do you need ink for, anyway?"  The Deputy chortled and turned to the Assistant Managing Editor and said, "He asked what do we need ink for..."  The thoroughly drunk Managing Editor overheard that statement and shouted, slurring the syllables slightly, "Inkless printing!" Immediately everyone in the executive ballroom responded in unison with the shout, "Inkless printing!"  An ambitious and abrasive Associate Editor for Photography bolted from the ballroom and ran to the newsroom.  Bursting in, he hollered at the Tribune's journalist, "Inkless printing!"

The Tribune's journalist took a slow, decisive chew on his cigar.  Then he stood up and hurled his half-chewed, saliva-drenched cigar across the newsroom.  It struck the wall just above a photo of the Tribune's founder in his first job as a newspaper carrier.  A thin line of brown liquid dribbled down the wall onto the photograph.

Only the Associate Editor for Photography and the Lead Headline Writer, who was acting as Managing Editor, were in the newsroom. The Tribune's journalist said to them in a quiet, menacing voice, "Those f@#$ing suits don't have a clue about real journalism."  Then he kicked over his wooden chair and stormed out of the newsroom, cussing and swearing.

The Tribune now has an immediate opening for an experienced, highly skilled journalist.  Publication of the Tribune will resume as soon as this position is filled.
Posted by Douglas Galbi at 10:35 PM

The drama at the OST is compelling. If the OST had a journalist, he or she could certainly connect the dots between this story and an earlier one.

Clearly, this shut-down was crafted by the scheming journalist with the backing of union thugs to bring the OST to its knees so he could have a few days off. The public is much the worse for this calamity.

I suggest that the Ode Street Tribune seek Journalistic help in India. Almost all of our leading corporations are having work done off shore to reduce cost. Having your writing done in India (or China) could reduce your payroll, so that you could increase your profits (naturally not reduce your rates). You could even play the game that Apple is playing by doing the final step in the US so that you could label you product "assembled in the US".

Brand-new Radnor Heights resident here. Glad to know I have a place to receive my important local news!

Kerry, welcome to this excellent neighborhood. If you or anyone else are interested in working as a journalist, please submit an application, references, and work samples to the Ode Street Tribune. Don't miss this promising non-paying career opportunity!