look out for new stops 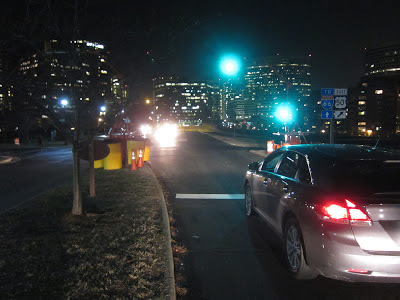 Here's the deadly mistake.  Supposed you are sitting at the red light on N. Meade St., facing downtown Rosslyn, waiting to take a left turn onto the little Arlington Blvd. You see a line of cars opposite you on the other side of the road.  The light turns green.  The line of cars opposite you doesn't go.  You think, "oh, I have a protected green, and they have a red."  You turn left, and get broadsided by a car going through the green light on another lane opposite further to the left.

The stopped line of cars opposite to your left are cars in the left turn lane, not using their turn signals.  Your side of the road is one lane, but the other side of the road has three lanes.  The temporary traffic light structure makes those other two (non-turn) lanes less visible.  Make sure that the opposite lanes further to the left are clear before you go through through the green and turn left.

Posted by Douglas Galbi at 9:45 PM