A complete-street makeover to Meade St. to the Rosslyn Vista Park section of Meade St. is coming this summer.  From an Arlington County community relations specialist:


This summer, Arlington County is making changes to N. Meade Street between the Arlington Boulevard Bridge (Route 50) and Marshall Drive. These improvements are intended to make N. Meade Street a “complete street” – to better accommodate all road users including pedestrians, bicyclists, and motor vehicle traffic. Specific changes include:

No changes to parking are planned as part of these improvements, and they will not affect the capacity of the intersections. The narrowed lanes should have a calming effect on motor vehicle traffic, and the bicycle lanes will improve the mobility of bicyclists through the corridor. We expect the changes to be completed by the end of summer. Questions can be directed to the County’s project manager, David Kirschner, Traffic Engineer, at dkirschner@arlingtonva.us.

The Ode Street Tribune's journalist, with boots on the ground and notebook in hand, brings you more information about street work. 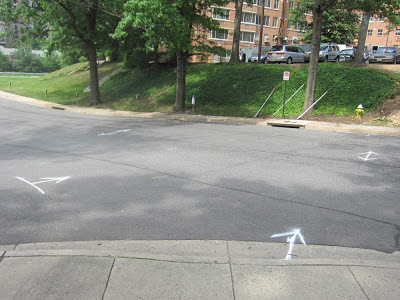 Notice the new, white markings on the street.  Recently the nearby 12th St. and 14th St. were repaved. The Tribune's investigative journalist speculates that this section of N. Ft. Myer Dr. will also soon be repaved.
Posted by Douglas Galbi at 10:35 PM