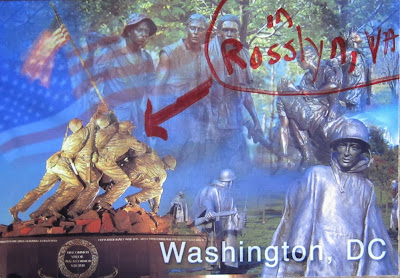 Acting on a tip from an anonymous source, the Ode Street Tribune's team of investigative journalists carefully examined the postcards in the Rite Aid store in the Rosslyn metro mall.  One postcard stated on the front "Washington, DC" and showed a picture of Rosslyn's famous Iwo Jima Marine Corps Memorial.  On the back of the postcards was this statement:

The Iwo Jima Marine Corps War Memorial is not in the city of Washington, D.C.  It's in Rosslyn.  The Ode Street Tribune demands that the Rosslyn Rite Aid store stop selling these postcards until they are corrected.

The investigative journalists also found that none of the postcards explicitly celebrated Rosslyn,.  That's outrageous.  Visitors to Rosslyn are naturally delighted to be in Rosslyn.  They should be able to spread their joy worldwide through appropriate, factually correct postcards.
Posted by Douglas Galbi at 10:33 PM