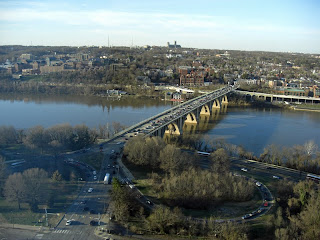 Amid the spectacular views from the Waterview Conference Center, Ron Carlee and Larry Roberts spoke about leadership in government.  Ron Carlee worked for Arlington County government for 29 years. This past fall, after serving for eight years as the County Manager, Carlee moved to the International City/County Management Association, where he is is executive-in-residence and director, Strategic Domestic Initiatives. He also blogs at the Huffington Post.  Larry Roberts served as Virginia Governor Tim Kaine's chief counsel and became Kaine's senior advisor at the Democratic National Committee.  Both Carlee and Roberts spoke in their own personal capacity, sharing their personal views based on their government leadership experiences.

Carlee and Roberts offered interesting stories and insights into leadership in crises.  Carlee recounted that on Sept. 11, 2001, six months into his term as County Manager, he was doing a presentation on leadership.  The terrorist attacks interrupted his presentation and tested his skills.  He said that who is in charge should depend on the objective.  He recalled that in a meeting on Sept. 12, a General opened the meeting by saying that the Arlington County Fire Chief is in charge, because the objective was to deal with the explosion and fire recovery at the Pentagon.  One under-appreciated challenge Carlee faced was getting National Airport re-opened.  That problem needed to be addressed politically as well as technically.

Roberts spoke about responding to the massacre at Virginia Tech.  He explained that Gov. Kaine was in Tokyo at the time.  Rapidly bringing Gov. Kaine back from Tokyo required working with the White House.   Dealing with the crisis required detailed human interventions, such as working to give parents access to their slain children.  It also required doing the right thing at a policy level: setting up an Independent Review Panel.

Both Roberts and Carlee emphasized the importance of emergency preparation and having relationships already in place to work effectively in a crisis.  To avoid ego clashes, turf battles, and responsibility dodging, Roberts pointed to the importance of basic values, an ethos of public service, and doing the right thing.

Carlee and Roberts also spoke about differences in governing in a "one-party government" vs. a bitterly divided, highly partisan one.  Carlee noted that when he began working for Arlington in 1980, Republicans had a majority on the County Board.  While all the members of the Arlington County Board currently are Democrats, Carlee joked that it seemed at times like the Board Members were from five different parties.  Board members dealt with their differences without a lot of bickering, and they genuinely sought consensus.   Carlee noted that the County Manager is statutorily prohibited from being involved in party politics and that the Board Members respected his professional status.

Roberts stated that a system of permanent campaigns has fostered a bitterly partisan environment in Virginia state politics and national politics.  Redistricting, which technology has made more effective, creates safe seats for incumbents and discourages politicians from reaching across party lines.  Politicians who reach across party lines have to fear a primary challenge within their own parties.  Primary voters tend to be more extreme than general election voters.  Without reform to take redistricting out of the hands of the legislature and foster inter-party competitive districts, polarization and paralysis will be a major problem and may lead to the rise of a third party.

Roberts observed that the explosion in information and communications capabilities has positives and negatives.  New media enables new organizing possibilities such as Organizing for America.  On the other hand, now there's no common set of facts and no common framework.  If different sides can't recognize common facts, getting to reasoned agreement is difficult.  In these circumstances, calling a legislature into special session doesn't make sense unless the legislature already has an agreement worked out.

Email ThisBlogThis!Share to TwitterShare to FacebookShare to Pinterest
Labels: politics