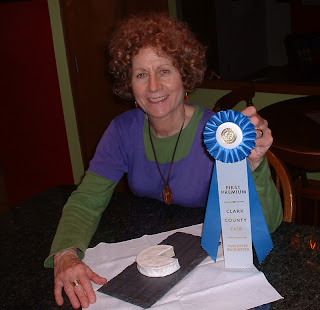 An Ode Street Tribune foreign correspondent reports that Joan Galbi won a first premium blue ribbon in the Clark County Fair's cheese-making competition.  The Clark County Fair has been held for nearly a century and half in Washington, the state far west of Rosslyn.  It attracts the finest cheese-makers west of the Mississippi.  Galbi emerged victorious with a Camembert made with fresh goat's milk.  She has been widely regarded as a leading cheese-maker since her parsley-pesto goat cheese triumphed at last year's Clark County Fair.

Arlington County will host its own fair August 18-22 at the Thomas Jefferson Community Center.  Arlington sadly lacks goats.  Moreover, the Arlington County Fair oddly doesn't include a cheese-making contest. So you'll have to find other venues to display your cheese.
Posted by Douglas Galbi at 11:08 PM

Congratulations to Joan Galbi and to the Ode Street Tribune for recognizing the importance of this event and for carrying this story to provide some deserved recognition.