The Black Box Theater at Artisphere on Friday night, January 14, will present UrbanArias, a new, Arlington-based opera company that produces short, contemporary, accessible operas.  UrbanArias attracted standing-room-only crowds for both of its performances at Artisphere's 10-10-10 opening extravaganza.  This Friday's night performance will be an hour-long program of seven mini-operas.  The program features national-level singers, composers, and directors in mini-operas that encompass drama rather different from what you might have heard from your grandfather's beloved opera records.  Come to Artisphere for fun, fun, fun opera this Friday night.

The program is extraordinary.  The first mini-opera will be "Betty Box Office", an opera about an office employee of an arts organization.  She has "artistic aspirations."  The Ode Street Tribune's staff declares unanimously that such aspirations should be sung shamelessly and joyfully.  Reaching more vigorously for reality, the next mini-opera explores how I Love Lucy characters deal with domestic abuse.  The composer of this mini-opera is Jake Heggie, who composed the widely performed and critically acclaimed opera, Dead Man Walking.  The program also includes three mini-operas from Seymour Barab's new cycle of mini-operas, In Questionable Taste.  Robert Wood, UrbanArias Executive and Artistic Director, noted about these pieces:

They’re all jokes, expanded, staged, and set to music.  They’re very funny (although some of them are a little coarse for us; after all, we do hope to get NEA funding some day!) ... I have chosen three of the cleaner ones, although I won’t spoil them for you here; you’ll have to come on the 14th.  I will tell you, though, that the cast burst out laughing as they read through each of them.

The program also features mini-operas about a knife-throwing duo and a couple struggling to connect to each other through video phones, webcams, and Skype.  Needless to say, these mini-operas display a new world of opera. 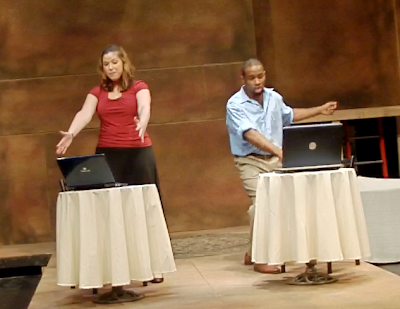 UrbanArias is a great example of burgeoning art, fashion, and culture in Arlington.  UrbanArias' Executive and Artistic Director Robert Wood lives in Arlington's Courthouse neighborhood and walks back and forth to Artisphere in Rosslyn.  UrbanArias intends to commission short, new operas from composers across the U.S. and bring them to the stage right here in an Artisphere festival.  UrbanArias first festival of opera will be in April of this year.  Keep your ears open for information about that festival.  Artisphere in Rosslyn is going to be at the center of where the opera world's singing.

Photo above courtesy of UrbanArias.
Posted by Douglas Galbi at 4:56 PM