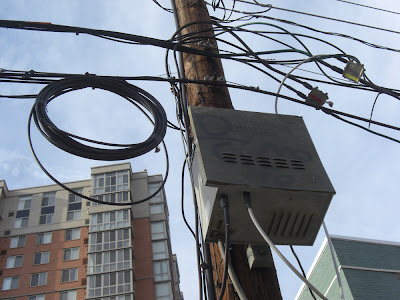 On Monday, March 15, the Ode Street Tribune reported an open Comcast cable power box on a utility pole in the neighborhood.  The very next day, the Tribune received a call from a Comcast representative seeking more information and offering an assurance that the problem would be fixed promptly.  A Comcast representative also added to the Tribune story a comment assuring readers that the problem would be addressed ASAP.

By the very next evening, the utility box had a functional cover.  That's outstanding Comcast service!

The Ode Street Tribune regrets that a week has passed before it has reported this important breaking news.  Organizational failures, a large backlog of neighborhood news, low staff morale, and inadequate journalistic staffing and compensation all contributed to generating this poor service.  The Tribune will strive with the limited resources at its disposal to respond more quickly in the future.
Posted by Douglas Galbi at 8:52 PM

I can't say if the author is being sarcastic, but it may be likely so. Comcast, though sometimes are badgered by complaints, still do provide a decent service to watch movies at,