On April 12, 1961, cosmonaut Yuri Gagarin became the first person to go into outerspace.  To celebrate the fiftieth anniversary of that far-reaching event, Artisphere is hosting an out-of-this-world party on Saturday, April 9.  This Countdown to Yuri's Night (C2YN) party will include the sensational 2011 Burlesque Space Show (Cosmonaughty Variety Show), Lunar Dance Party with the Atomic Mosquitos and the ska band Eastern Standard Time, Reduced-Gravity Chamber (aka moonbounce), Celestial Costume Contests, Complimentary Space Junk, and Sci-Fi Trivia.  Tickets for this blowout are $20 in advance, $25 at the door.  Get them here. 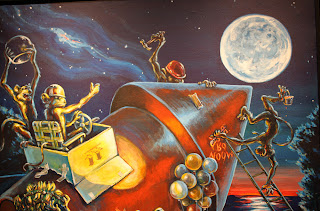 Associated with the party is the C2YN Astro-Pop Art Exhibition.  This exhibition is freely on display in Artisphere's Mezz Gallery through April 30.  Curator Jared Davis has organized an exhibit to rival a meeting of the G-40.  Davis' Monkey Moonshot (detail above) illustrates the fantastic drive to explore space that space enthusiasts, engineers, scientists, and these artists share.  Andrew Wodzianski's Assembly Ball is a more formal composition, yet with pastel coloring and an alien player escorting six exotic dates.  Meanwhile, Dana Ellyn's Zero Gravity Blackout rockets sideways.  Professional illustrator Elstabo has created two pieces especially for this exhibit.  Look for the fearfully smiling cosmonaut.  Relish the feel of the earth under your feet. 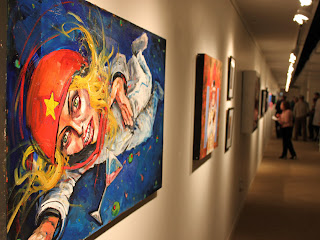 Laika preceded Yuri Gargarin into space, but let a dog report that. You and your best friends should go to the Countdown to Yuri's Night party on Saturday, April 9 at Artisphere.  Sorry, no dogs allowed. 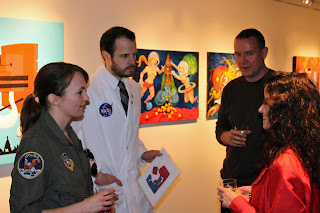 Email ThisBlogThis!Share to TwitterShare to FacebookShare to Pinterest
Labels: ARTISPHERE