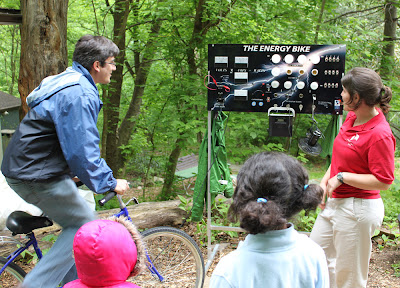 A bicycle connected to a lightboard at the Potomac Overlook Park Heritage Festival demonstrated that incandescent lights consume a lot more energy than florescent lights, which in turn consume a lot more energy than LED lights. Even a little girl who could barely reach the pedals could generate enough electricity from the bike to light the LED lights.  Her fit-looking father had to make an effort to light the incandescent lights.

Serious cycling can generate a lot of energy.  Gary M., a 49-year-old marvel of physical fitness, last weekend generated 230 watts on average for three hours during the local, intense Laterne-Rouge/Whole-Wheel-Velo-Club/whoever-else-wants-to-come ride.  Total power consumption in the Ode Street Tribune's world headquarters for the month of March was 141 kilowatt-hours.  Hence in a single morning's ride, Gary generated about 15% of a March day's power consumption in the Tribune's headquarters, which also serves as the living quarters for the Tribune's impecunious staff.

Cycling need not be just for fun and transportation.  By cycling, you could power an emergency sump pump to keep your basement dry during a storm that knocks out electrical power.  You could pedal-power a sewing machine, as many persons around the world have done since the invention of sewing thousands of years ago.  You could also power a blender to make yourself a smoothie.  David Butcher's wonderful pedal-power website provides insights and concrete technical details for you to do much more with your cycling exercises.


Just in the Rosslyn area, many person-hours of exercising are ongoing in Gold's Gym and the Synergy Fitness Center.  Why not have persons in gyms use their exercise to contribute energy to the community? This would be more impressive and more innovative than the green-colored envirocabs that now drive the streets of Arlington.  A Danish Hotel gives guests a $36 meal voucher for generating a mere 40 watts for 15 minutes.  Here in Arlington, many cyclists regularly put out hundreds of watts for hours.  Cycling can be an important local power source.
Posted by Douglas Galbi at 4:08 PM