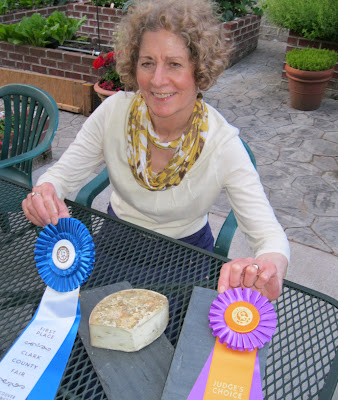 An Ode Street Tribune foreign correspondent in Oregon (that's about 2800 miles west of Rosslyn) reports that in the prestigious Clark County Fair cheese competition, Joan Galbi won a Blue Ribbon First Place and a Judge's Choice Award for her Fourme D'Ambert cheese.  The Fourme D'Ambert is a French blue (mold) cheese.  It's one of the oldest French cheeses and dates back to the Roman period.  The Romans didn't have modern refrigerators. So it's not surprising that they developed moldy cheese.

While Fourme D'Ambert is usually made with cow's milk, Galbi, in a gutsy gambit, used raw goat's milk.  She then aged the cheese for 60 days.  A French visitor to the après-competition tasting was enraptured with the cheese and declared, "That's a cheese that has something to say!"  The cheese joined Galbi's parsley-pesto goat cheese and her Camembert to make Galbi a three-time Blue Ribbon Winner.  As his neighbors can attest, the Ode Street Tribune's publisher would relish cutting this potent cheese.