According to a credible source, early this morning or late last evening an adult male hawk crashed into a third-floor picture window on the eastern side of Building 1309 of the historically important Westmoreland Terrace Condominiums.  The hawk died from the impact. 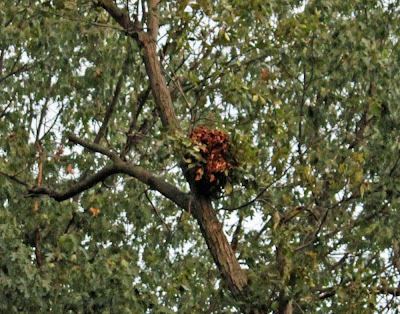 A similar tragedy occurred this past Saturday.  The two hawks apparently were a nesting pair.  They built their nest in an old tree on the wildlands across from Westmoreland Condos on N. Ft. Myer Dr.  The nest is now desolate. 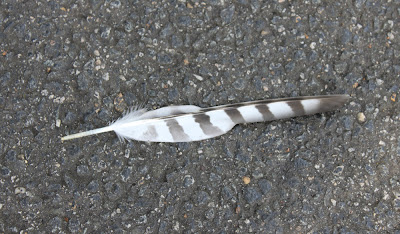 How did the Tribune's investigative team manage to form this conjecture based only on the discovery of a feather?  The key insight is the speculation that the feather is a feather from earlier combat with a real intruding hawk.

Stay tuned to the Ode Street Tribune for the best local investigative reporting.

Update: Westmoreland residents reported hearing cries of chicks from the nest earlier this weekend.  Unfortunately, without their parents, the chicks are doomed.
Posted by Douglas Galbi at 11:16 PM