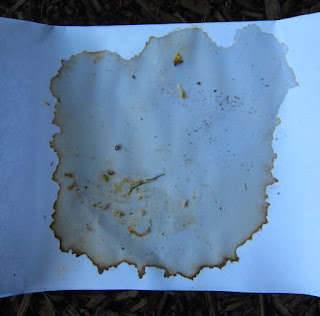 The Ode Street Tribune's printing division, long affectionately known as the ink-stained wretches, had its self-esteem squeezed further today.  The Tribune's recent blockbuster exposé of a squirrel eating mushrooms generated a reader request to provide a spore print of the mushrooms.  The Managing Editor reported to the Publisher that the newsroom did not have a mushroom spore-printing technician.  The Publisher, enraged, screamed, "Tell the f**ckers in the f**cking print division to print it, or their asses are gonna be in cement, get it?" He then hurled a pencil eraser, two dominoes, and a pack of cards at the befuddled Managing Editor, who quickly retreated to the news room.

The Tribune's printing division has been struggling to maintain its importance. For nearly six months the division has been working on forming a committee to explore the publisher's idea of "inkless printing."  Management has received reports that the Ode Street Tribune's competitors are replacing printing presses with internets.  No one in the printing division knows how to operate an internet.  If the Tribune also purchases internets, layoffs are inevitable.
Posted by Douglas Galbi at 10:27 PM

I suspect that the work is NOT an actual mushroom spore print but the aftermath the print crew taking a taste of mushroom themselves.

I hear that printed version of the OST are collectors items