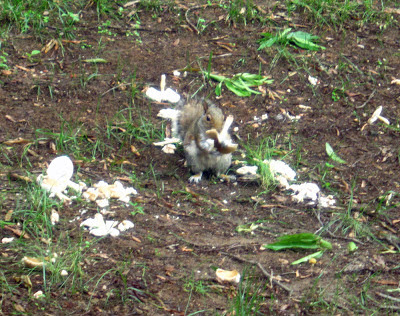 This evening at Rosslyn's historically important Westmoreland Terrace Condominiums, a squirrel was munching on wild mushrooms.  The Ode Street Tribune's recent report on wild mushrooms in Rosslyn declared that only mushroom experts who know Latin should eat mushrooms they find in the wild.  This squirrel undoubtedly doesn't know Latin.  Hence it doesn't know the genus and species of the mushroom.  Without scientific identification, edible mushrooms can't be scientifically distinguished from poisonous mushrooms.  This squirrel may be facing a much more painful death than the two neighborhood hawks that died in tragic aerial accidents.

To serve veterinarians providing emergency care for squirrels who have eaten poisonous mushrooms, the Tribune is appending three pictures of the mushrooms that the squirrel was eating.  Keep in mind, however, that there is no substitute for boots-on-the-ground, direct observation of mushrooms and local news. 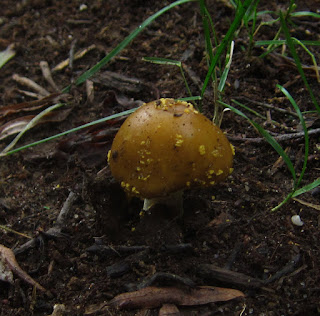 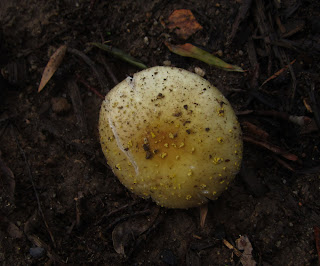 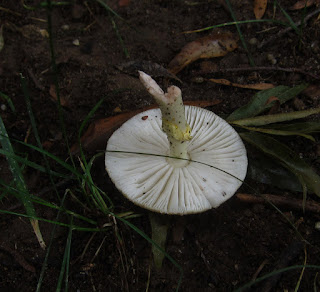 Posted by Douglas Galbi at 9:31 PM

Please, Please, make a spore print of this mushroom. Some expert may then be able to identify it and indicate if we need worry about this squirrel.

Those mushrooms are probably Amanita Muscaria or Amanita pantherina. They are deadly poisonous to humans. Several people die each year from eating those mushrooms.

However, According to Dr. John Rippon, a world expert on fungal diseases, “squirrels have an interesting adaptation that allows them to eat mushrooms containing deadly amanita-toxins without being affected There are three important chemicals in the amanitas. Two will knock you right off, but are destroyed in cooking. The third one is the interesting one: it consists of the second amanitin, bound tightly to a glycoprotein molecule. When we digest the mushroom, the enzymes in our gut break the bond between the toxin and the glycoprotein, leaving the toxin free to enter our bloodstream, while the glycoprotein is excreted (a glycoprotein is a mucus molecule, in case you don't know). What the squirrels have done is line their gut with a toxin-compatible glycoprotein, so that as soon as it gets split from its original glycoprotein molecule, it gets rebound to the squirrel glycoprotein, and excreted along with it. Obviously, the squirrels don't cook their food to destroy the first two molecules, but presumably those get bound in exactly the same way. Thus, squirrels and a few other animals (guinea pigs also, I believe) can eat mushrooms that are highly toxic to other animals with no ill effects."
Source: www.mushroomthejournal.com/greatlakesdata/Terms/squir27.html

Quality stuff may be the key to invite the users to visit begin to see the blog site, that’s what this site provides.
http://dartsbeasts.com/