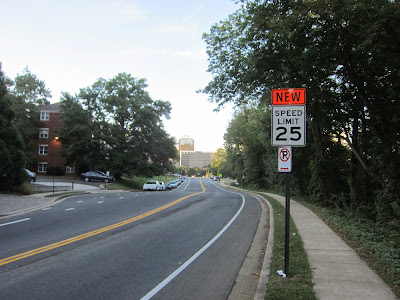 The Virginia-Rosslyn-Washington bike expressway now has bike lane markings along Meade St. in Rosslyn.  The speed limit along the street has been reduced to 25mph.  These changes improve safety.

Many cyclists cut through Rosslyn Vista Park rather than ride Meade St. and Marshall Drive.  Heading south on Meade St, cyclists would arrive at Marshall Drive in front of the entrance to Joint Base Myer Henderson Hall.  Unfortunately the left turn at that intersection is treacherous.  Traffic does not stop coming out of the Joint Base.  Some of that traffic turns left at speed onto Meade St.  Moreover, because of entrance gate, view of the (far) lane is obstructed.  Some cyclists also come through the gate at high speed.  They are particularly difficult to spot.   Cyclists turning left at this intersection should proceed with caution.

The reverse route is much safer.  Ride the path up to the Netherlands Carillon and continue straight.  Watch out for the jog in the trail at the bottom of the short downhill.  Watch also for wet leaves and ice at that point.  Ride up Marshall Dr. on the sidewalk, and bear right at Meade St., continuing on the sidewalk.  You can drop into the bike lane via a curb cut about 20 yards from the intersection.

Pedestrians walking in Rosslyn Vista Park would prefer cyclists to go around the park on the new bike lane. If you ride through the park, be careful of pedestrians and yield to them.
Posted by Douglas Galbi at 8:10 PM

After reading this story and looking at the map to try and figure out what in the heck it was talking about, I had a Eureka moment about Rosslyn's true exceptionalism. The revelation is this: in all of the rest of Arlington, streets to the south of Arlington Blvd are considered South Arlington. Not in Rosslyn: North Meade is south of Arlington blvd, as is N. Pierce, N. Ode, and more. Rossyln onece again is proven to be the the exception rather than the rule.

No doubt about it, Rosslyn is special.

Given that Rossyln's very existence, and more specifically, its existence as a North Arlington community, or at least the Radnor-Ft. Meyer Heights portion of Rosslyn, depends on its border with Arlington Cemetery, I believe it's high time the BID work on new slogan:

Rossyln: Life Begins Here
Rossyln: If you're south of here, you're dead
North Roslyn: At least we have a buffer from South Arlington