The prestigious Rosebud Film & Video Festival is this Saturday, January 24, at Rosslyn's Artisphere starting at 12:30pm. Out of 60 submissions, 20 were selected for the showing. The complete list of films and times is available here. You can see some film descriptions and previews on the Rosebud facebook page. Rosslyn is a leading location for film & video shoots. Expect to see in the best films some footage of Rosslyn. 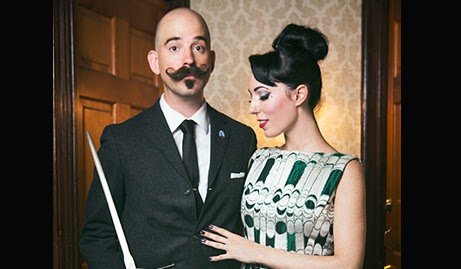 
As a variety show of the oddest persuasion, Strange for Hire draws from the world of circus, sideshow, vaudeville and burlesque. Join Mr. Donny V, the Gentleman Oddity, Frankie Sin the Bad Girl of Broadway, and Insectavora the Fiery Femme Fatale for an event that invites you to step into the bizarre world of the carnival, sponsored by Ripley's Believe It Or Not (Baltimore) and Shocked and Amazed to bring you an evening of the most delightfully unusual entertainment money can buy!

This fine event will be at 9pm in Artisphere's Black Box Theatere.  Tickets are $17 in advance, $20 at the door. Keep Rosslyn weird!
Posted by Douglas Galbi at 11:46 PM