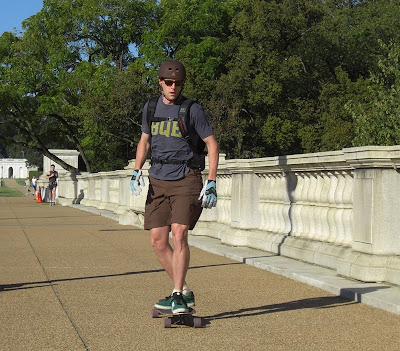 If biking to work doesn't appeal to you, have you considered skateboarding?  Despite only taking up skateboarding six months ago, Alex skateboard-commutes two or three times a week between his home in the Clarendon area and his workplace in DC near Metro Center.  He favors the Iwo Jima route over the Custis trail / Key Bridge route because the later has steep descents that are tricky to negotiate in high traffic.


Skateboarders visualize urban areas differently from the general population. Handrails, empty pools, concrete benches and walls are stripped of their traditional functions and minimized to simple form, shape and line. Whether jagged and slow or smooth and fast, the experience of riding a board blends artistic vision and an understanding of physics with adventurous athletics, nurturing the creating mind and fueling the art of improvisation.

You won't get an experience like that driving a car.


[video included above]
Posted by Douglas Galbi at 10:41 PM

Learn how to skateboard, and get skateboarding trick tips and instructions. Get gear reviews and news intended for beginner skaters and veteran skateboarders. read the full info here

I haven’t any word to appreciate this post.....Really i am impressed from this post....the person who create this post it was a great human..thanks for shared this with us. skateboard blank decks

I am always searching online for tips that can benefit me. Thanks!


You can visit site at
Ladera Skateboards

You can check the full longboard with the Longboard Wiki

Thanks for an interesting blog. What else may I get that sort of info written in such a perfect approach? I have an undertaking that I am just now operating on, and I have been on the lookout for such info. https://longboardbrand.com/best-skateboard-cruising/

Really skateboarders are great urban areas. Very nice place I once went for a fence in the US skateboarding zones. I was lucky enough to have people skating in all walks. However, one genus found that most people use good electric skateboards at low prices.

your article is a pleasure to read, especially I enjoyed reading the most of its subject matter. However, on Skateboard, I think I need some more discussion, so my community people, and visitors of our website scooterlay can benefit more from it as/when they need. Thank you so much, by the way!

I am a beginner in skating and for learning purposes, I am following relevant blogs. This is one of the best blogs that I have followed so far. The video is very good for getting basics. I have purchased swag board electric skateboard to implement the learning tips on the ground. Hope I will be able to achieve what I want in skateboarding.

Thank you for sharing this. We are planning to sell the same type of longboard in our online shop Dakhm