This past September, some street persons faced eviction from their home under a bridge.  Perhaps because of the intervention of caring persons, the eviction didn't take place.  They continue to live there throughout the winter despite a noisy, dirty renovation project right in their midst.

The community under the bridge has grown larger, better provisioned, and more diverse.  Their bedding has improved, and they have acquired some books and some bikes.  Over the past few years, the number of men living there has grown from about two to about four.  Sometimes one guy slept, not under the bridge, but about twenty yards away.  That probably indicates some mistrust, tension, or conflict.  In recent months, some women and children have been associating with the men living under the bridge.  The women and children may be part of the men's families, but they don't seem to live there. 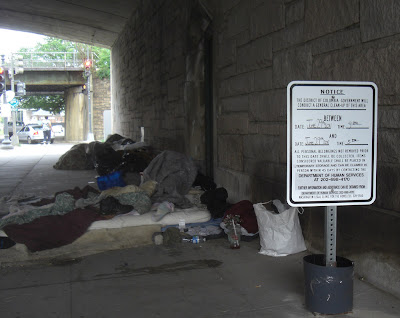 Now the persons living under the bridge again face eviction.  It's true that they now take up somewhat more of the sidewalk.  In the hot weather, there's also some smell of urine.  But the smell about a local fishmarket is far, far worse right now.  An eviction in June is more humane than an eviction in September.  Nonetheless, the Ode Street Tribune resolutely opposes the eviction of street persons who are not causing anyone serious harm.

You can help in a variety of ways persons who are trying to live in difficult circumstances.  The Arlington Food Assistance Center is currently requesting donations of fresh fruits and vegetables.  If you have a garden, there's no better way to share its bounty.  In addition, the Arlington Street People’s Assistance Network (A-SPAN) is seeking help to win a new van through a Facebook-based promotion with Toyota.  You can also help persons by showing them some respect and not unnecessarily creating problems for them.
Posted by Douglas Galbi at 11:28 PM