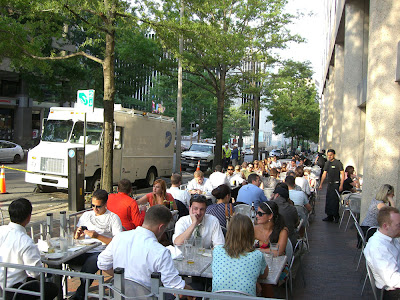 Activity in downtown Rosslyn is picking up.  D. Wright Sigmund, the chairman of the Rosslyn BID's Retail Task Force, recently observed that Rosslyn is ripe for retail expansion:


The new Washington area consumer is relatively young, highly educated, drinks Starbucks, eats out four nights a week and spends more than his predecessors. Rosslyn is one location where this ideal consumer lives and works. Here in Rosslyn, 74 percent of residents are college-educated; their average age is 38; their average household income is $100,168. Plus, Rosslyn hosts a 40,000-strong community of professionals who commute here five days a week. These consumers are the target of all retailers who have focused on the area for growth.

With pedestrian skywalk connecting downtown Rosslyn to Roosevelt Island and a new non-motorized boathouse along Rosslyn's Potomac shore, Rosslyn will become an even more active scene for leisure and relaxation.

But let's hope that Dominion Power repair trucks are less commonly seen.
Posted by Douglas Galbi at 12:04 AM