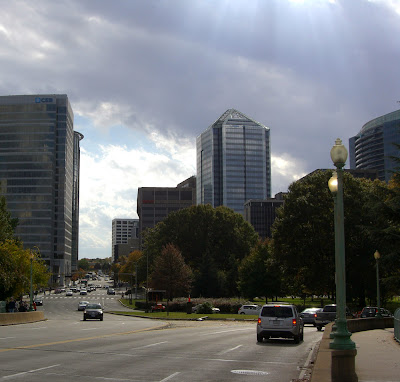 The Ode Street Tribune is considering moving its corporate headquarters from the historic Westmoreland Terrace Condominiums to the top floor of Rosslyn's new 1812 North Moore St. tower.   The top floor of 1812 North Moore offers a commanding view of the region and is particularly appropriate for a leading news source.  "When people think of the Ode Street Tribune, I want them to raise their eyes," said the Tribune's Publisher.  "Yes, I support everything the Publisher says.  The Tribune is all about looking up," declared the Tribune's Managing Editor.  "Agreeeeeeeed," chimed in six deputy editors, five assistant editors, four departmental heads, three news editors, two layout coordinators, and a biz-head in a tweed suit.  The Tribune's journalist silently and thoughtfully continued chewing on his cigar.

The 1812 North Moore tower has been completed in recent weeks.  It's the tallest building in the metropolitan area apart from the Washington Monument.  No tenants have yet been signed.  Bidding to lease the top floor is expected to be intense.  The Ode Street Tribune's management committee is drafting a proposal to hire a consultant to do a feasibility study for the Tribune's bid.  In an exclusive interview, the Tribune's publisher declared that the Tribune's revenues have been rock solid since its historic founding in 2007.  The publisher expressed confidence that the Tribune could put together a winning bid.
Posted by Douglas Galbi at 9:52 PM

However will you hoist the printing presses up there?

Good question. Probably will need a crane. But the good news is that we're looking at new technology to deliver newspapers from the top of the tower with an air gun.