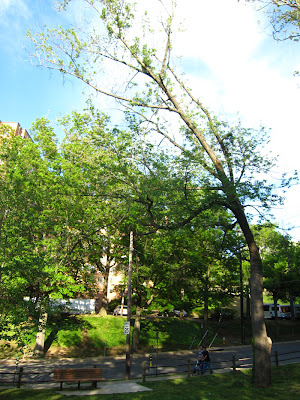 A tree that English ivy was attacking has been chainsawed to the ground and its rootless trunk and limbs dragged off.  The tree unquestionably was alive.  It was old, and the weight of unresolved neighborhood problems and bitter controversies had hunched over its trunk.  Yet light still glittered in the green of its leaves.  No more. 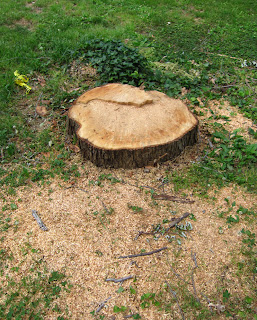 While removing this tree wasn't necessary to make way for the children's playground forthcoming in Ft. Myer Heights Park, Arlington County arborists recommended its removal.  The Ode Street Tribune sought a second opinion from our neighbor Urban Forestry expert.  He concurred with the tree's removal:


The tree is still leafing out but it appears about 40% of the remaining canopy/branches are dead (some of which hang over the park bench). It also has significant trunk damage and lost a large limb last year, and is a relatively undesirable species (Silver Maple)  Rather than maintain a tree now in severe decline better to plant a new one nearby- the sooner that is done the sooner the new one can start growing. So I would just make sure that the tree is replaced with a new one once the playground work is completed.

Thanks for this fantastic article. It contains whole lot data which I need. I am bookmark your site by my next visit.