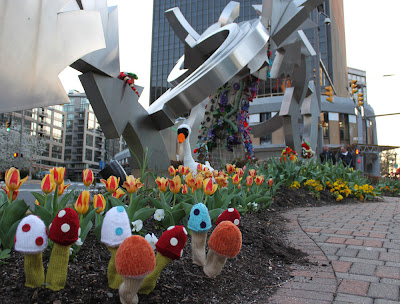 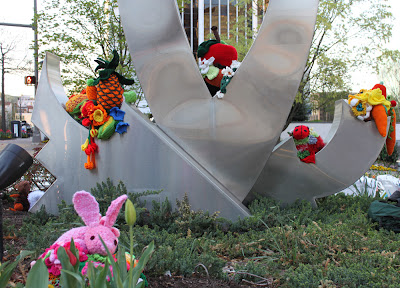 From Rosslyn Vista Park to Gateway Park, Rosslyn has been a well-known nighttime destination for local lovers.  The yarn fantasy now warming Cupid's Garden is another good reason to be walking the streets of Rosslyn. 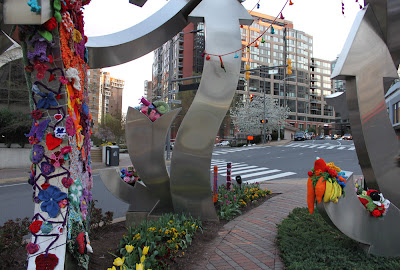 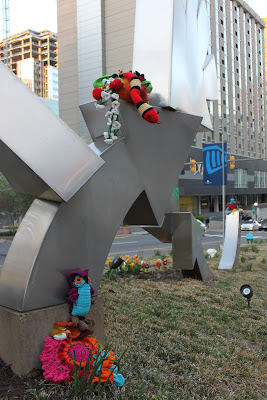 Meeting weekly at Artisphere for months, about 130 local volunteer guerrilla stitch brigade members knitted the fantastic array of objects now decorating Cupid's Garden. After some guerrilla stitch brigade members had worked an additional three hours attacking Cupid's Garden, an authority arrived on the scene and ordered them to line up. It seemed that they were going to get arrested, or worse, shot.  They were released on the scene under the condition that they promise to do it again. 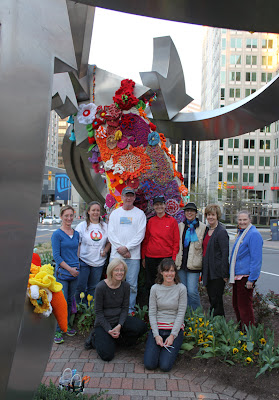 Posted by Douglas Galbi at 9:11 PM

How lovely!
Amist the construction on the road to see such artistic expressions.

Wonderful spring time color! Great to see the community participating in a creative and positive project.

I've been browsing tonight, looking for how people reacted to Chris' sculpture over the years, and I think this is really nice. Chris Gardner was my uncle; he passed away last night in his sleep. I don't know if he was aware of this project - he's been ill for many years, but I think he would have liked it. Thanks for keeping his memory alive.