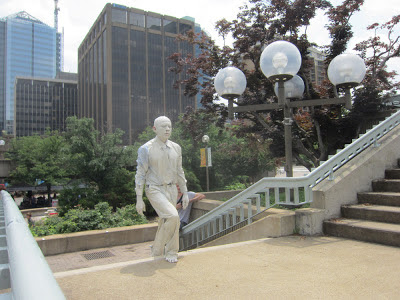 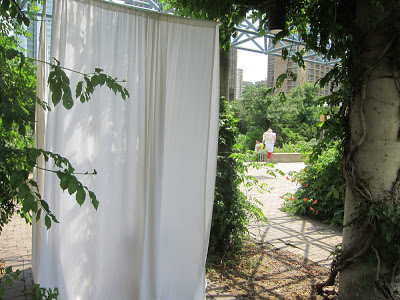 Anyone who doubts the value of performance art would have benefited from Daniel Embree's blessing booth.  Persons could enter Embree's booth one by one and receive a blessing from Embree.  Admission was free. 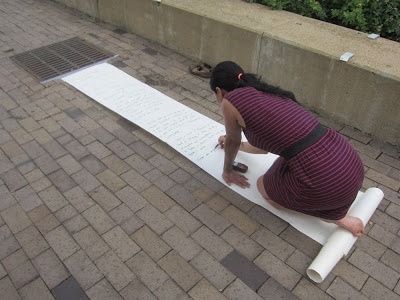 Rosslyn is home to several important media companies.  With the rise of the Internet, media companies have an urgent need to innovate.  Stephanie Barber & Bonnie Jones's performance, "A New Collaboration in Translation & Aliveness," explored new, more interactive understandings of writing:


Our bodies, memories, poetries, personal histories, political and national histories, religions, race, and idiosyncratic perceptions are inserted into a physical and real space occupied by an equally complex audience. The performance is a document created within the constraint of liveness, of being in relation to each other as performers and as audience members. Each performance is unique and is never repeated.

The Ode Street Tribune has formed a committee to study Barber & Jones's work and to formulate for its journalists new guidelines for personal interactivity in news article production. 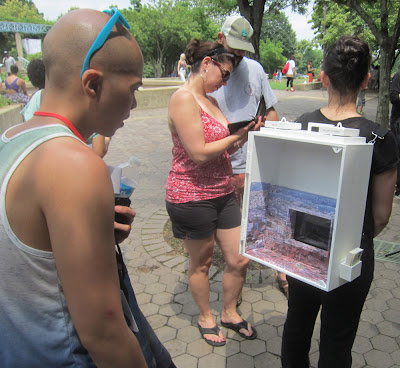 Rachel Schmidt and collaborators brought art to the people with backpack galleries.  You don't have to go to an art gallery to see art.  Much public art can be seen around the streets of Rosslyn.  Backpack galleries, like food trucks, economically put more art on the street.  That attracts more art lovers and creates more interest in public art, not less. 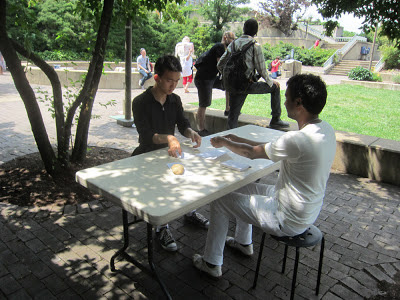 Andil Gosine was activating memories in exchanges with passers-by.  He asked triggering questions apparently meant to have something to do with love.  He asked one guy, "When did your heart skip a beat?" The guy wrote something about bike racing and his buddy passing him on a tough climb. Gosine gave in exchange, "The plane dropped.  I grabbed your hand." 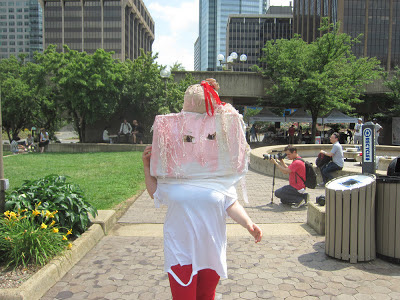 Katya Grokhovsky wandered around Gateway Park with a decorated box over her head in a performance entitled "The Lovely Immigrant."  Some people avoided her and looked at her strangely.  Rosslyn residents, in contrast, typically reach out and greet their neighbors, even if they look different.

Sunday is sadly the last day of SUPERNOVA.  Let's hope that another festival like this explodes in Rosslyn in the future.
Posted by Douglas Galbi at 8:26 PM

I'm afraid the OST's reporter is going to explode